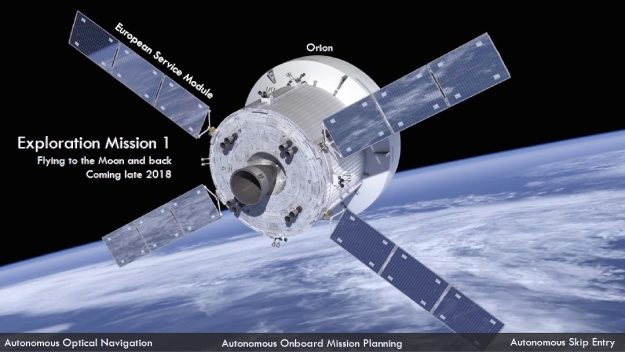 Image courtesy of NASA’s Johnson Space Center
The Orion spacecraft, which is being designed for travel to Mars, performed extremely well on its first flight to outer space on Dec. 5, 2014. That flight, called Exploration Flight Test 1, “was a smashing success,” says engineer Kelly Smith, an EFT1 flight controller who helped design the spacecraft’s guidance and navigation controls system. Next up for Orion is Exploration Mission 1, around the moon and back, with a launch scheduled for late 2018.

When the National Geographic Society held its first meeting in March 1888, its president called himself a student of exploration. This place called Earth, Gardiner G. Hubbard said, conjured the image of an enormous globe suspended in space, one side in shadow, the other bathed in sunlight.

For the society, the late 19th century signaled a new era of organized research relating to the geography of land and sea, the geographical distribution of life, and the science of geographic art and mapmaking. “When we embark on the great ocean of discovery, the horizon of the unknown advances with us, and surrounds us wherever we go,” Hubbard told the group. “The more we know, the greater we find is our ignorance.”

But the ignorance of which Hubbard spoke evoked the humility of simply not yet knowing — not a lack of smartness or determination. 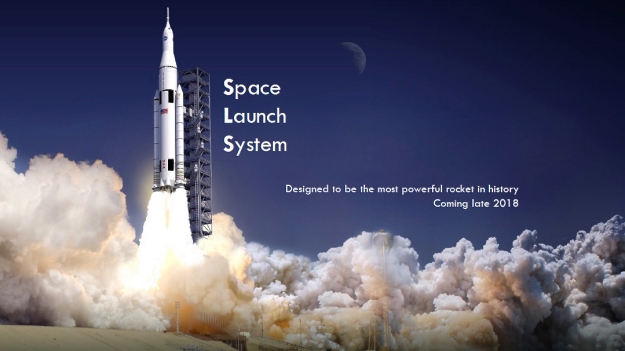 Image courtesy of NASA’s Johnson Space Center
The first job for the Space Launch System — being designed as the most powerful rocket ever built — will be to launch the Orion spacecraft on a test flight around the moon. NASA engineers are working toward a late 2018 launch for what would be Orion’s second test flight to outer space. But Orion won’t land on the moon on the 2018 flight, called Exploration Mission 1. Rather, in what engineer Kelly Smith describes as “the final shakeout test for Orion,” the spacecraft — with no humans aboard — will fly around the moon in retrograde, or a clockwise (and stable), orbit. 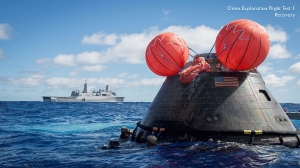 On the largest scale imaginable, it is the same brand of intelligent resolve with which NASA scientists and engineers today are building the Space Launch System (which will be the world’s most powerful rocket) and the Orion spacecraft being designed and tested to someday carry a human crew to Mars millions of miles from planet Earth.

With all eyes on Mars, it’s the same kind of scientific spirit that’s driving the One-Year Mission aboard the International Space Station as scientists and physicians study the effects of long-duration spaceflight on humans.

And it’s the same zest for knowledge that last week brought a small group of science-based educators and journalists to NASA’s Johnson Space Center in Houston for a first-of-its-kind event: the #spacED education media workshop. I was thrilled and honored to be a part of this 12-member group that was chosen by application to participate in the Sept. 15-16 event. 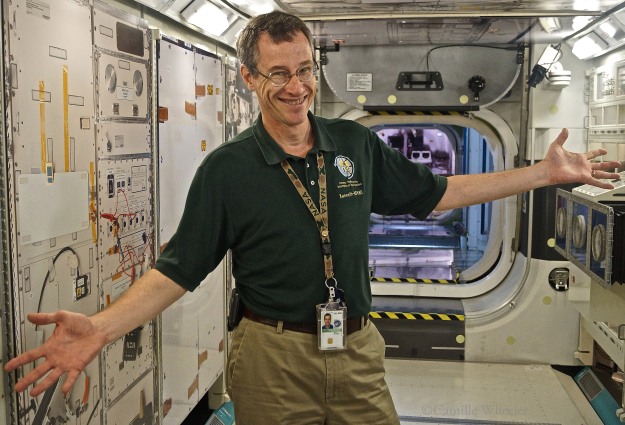 We toured Johnson facilities, ducking our heads to fit through passageways on an International Space Station mockup. We peeked inside an Orion capsule mockup and took turns sitting in the side-by-side front seats on a Space Exploration Vehicle. Some of us (I watched, and learned) operated space station and Orion docking simulators, the latter complete with spine-tingling sound effects. 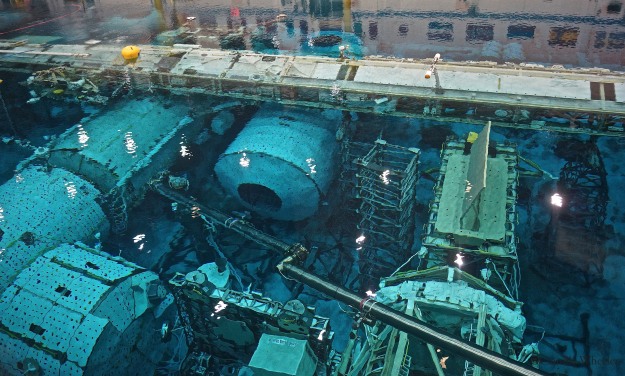 The Neutral Buoyancy Laboratory, located at the Sonny Carter Training Facility as a part of Johnson Space Center’s operations, includes submerged mockups of the International Space Station for astronaut training.

We visited the Apollo Flight Control Room, preserved and designated as a national historical landmark, and the historic White Flight Control Room now being used to support NASA’s Orion spacecraft. We toured the Neutral Buoyancy Laboratory (above) where astronauts train for the microgravity conditions of spaceflight in a 40-foot-deep pool that holds 6.2 million gallons of water.

On day one, Tuesday, Sept. 15, we were swept up in the festivities surrounding two momentous occasions: NASA astronaut Scott Kelly and Russian cosmonaut Mikhail Kornienko marked the midway point of their One-Year Mission aboard the space station; and Mackenzie Davis and Sebastian Stan, cast members in “The Martian,” starred in their own media day at Johnson Space Center, with TV crews and photographers following the actors’ every move. 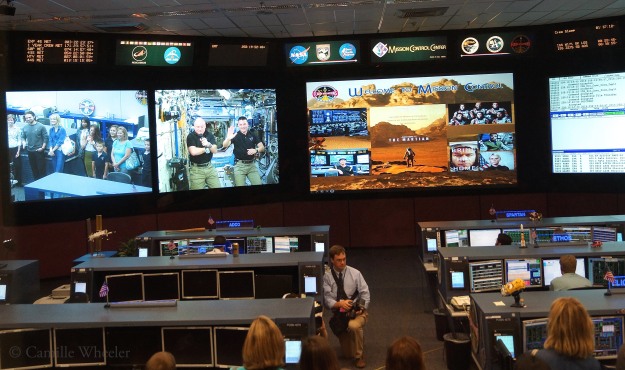 Tuesday, Sept. 15, 2015, was a special day for NASA astronaut Scott Kelly (left in second screen from left), who marked the halfway point of his historic one-year stay on the International Space Station. Adding to the festivities in Johnson Space Center’s International Space Station Flight Control Room was the presence (from left, far-left screen) of JSC Director Ellen Ochoa, “The Martian” movie actors Sebastian Stan and Mackenzie Davis, and family members on hand to say hello to Kelly and fellow astronaut Kjell Lindgren. 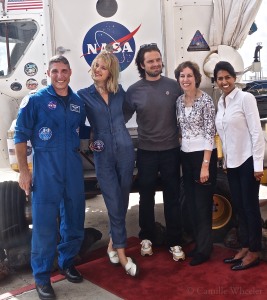 #SpacED day one ended with a wild ride of an assignment: don 3-D glasses for a private, full-length screening of “The Martian,” the 20th Century Fox movie set for release Oct. 2.

The #spacED group had a great time during the two-day workshop. It was heady stuff listening to, observing, and photographing astronauts and Hollywood actors.

But we were not mere tourists. Based on criteria we eagerly accepted, the #spacED group was here to work: Our mission was to gather information, establish connections with Johnson Space Center officials, and pledge our efforts to serve as conduits between classroom teachers and students and NASA’s fascinating journey to Mars.

As educators and journalists with diverse social media presences, we aim to help Johnson Space Center cultivate students’ interests in space exploration and in the supporting fields of science, technology, engineering, and math (STEM). Our task is to help shine a light on NASA’s multifaceted education programs for students and teachers — which I will be detailing in upcoming blog posts — that include research projects directly connected to the space station, all-expenses-paid educational visits to Johnson Space Center, interactive online learning experiences, and internship opportunities. 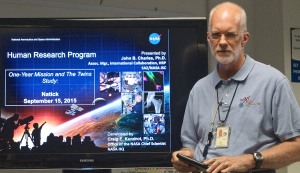 For me, the most meaningful interactions of the two-day workshop came during lunch with astronaut Ricky Arnold and briefings with key NASA experts. Most notably, the #spacED group learned about Orion spacecraft flight from engineer Kelly Smith and the One-Year Mission from John Charles, chief of NASA’s Human Research Program International Science Office who is the main researcher working with astronaut Scott Kelly. 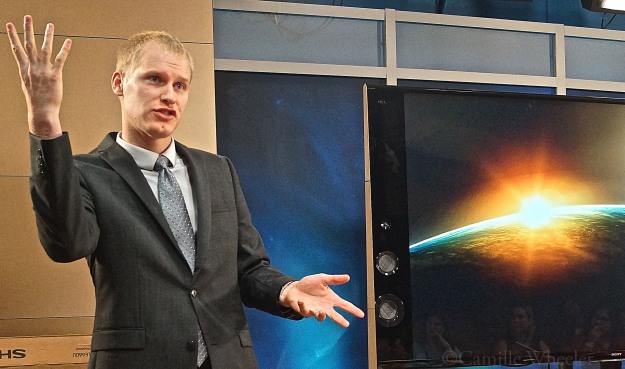 NASA engineer Kelly Smith tells the #spacED group about the success of Orion’s first test flight and what the future holds for this remarkable spacecraft.

Orion’s first flight to outer space on Dec. 5, 2014 — called Exploration Flight Test 1, or EFT1 — “was a smashing success,” said Smith, an EFT1 flight controller who helped design the spacecraft’s guidance and navigation controls system. “It was an unbelievable feeling.”

But as Johnson Space Center education officials Arturo Sanchez III and Bob Musgrove told us, not all classrooms are familiar with NASA’s research, including space-station activities and the related quest to send humans to Mars.

Sanchez recounted a recent conversation he had with Houston Independent School District educators. Some of the educators said they didn’t know what was happening on the International Space Station and that they weren’t hearing much about NASA’s space program in general.

Arturo Sanchez III, Integration Manager to the International Space Station in Johnson Space Center’s External Relations Office, encouraged the #spacED group “to help connect the dots for people in the classroom,” for teachers who are encouraging students to think about science and math.

A lot of people, says Sanchez, Integration Manager to the International Space Station in Johnson Space Center’s External Relations Office, don’t realize that NASA will celebrate 15 years of continuous human presence on the ISS in November. Many people, he says, aren’t aware of the global cooperation that’s enabling the scientific research experiments that characterize the historic One-Year Mission aboard the space station.

His hope for the #spacED group, Sanchez told us, was that during our two-day stay we would see the rest of NASA’s story: “That as an agency we’re thinking ‘What does our journey to Mars look like? What are the things that we’re having to learn?’ ”

Sanchez encouraged us “to help connect the dots for people in the classroom,” for teachers who are encouraging students to think about science and math. “If it’s what inspires them in the classroom today, that ultimately brings them to work at NASA,” he said.

Such students, Sanchez continued, might also work for high-tech companies and in career fields connected to exploration and innovation. “We know that you guys are critical voices to help us do that,” he told the #spacED group. 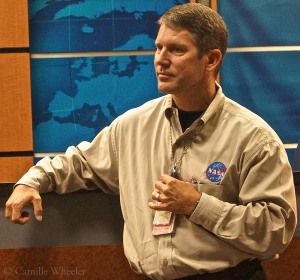 Musgrove, director of Johnson Space Center’s Office of Education, said he hoped that after our two-day stay we would be “NASA ambassadors that we can turn to to help tell our story and get the message out about all of the cool things that we do.”

Mission accepted: Beginning with blog posts over the next several weeks and months, I will help tell the story of Johnson Space Center, which serves as NASA’s lead for International Space Station operations and oversees Orion spacecraft development, including crew module, crew training, and mockup facilities, through its Orion Project Office.

I will tell the story of the One-Year Mission and the investigations under way that address health concerns in long-duration spaceflight, such as the loss of muscle and bone strength and fluid shifts suspected of negatively impacting vision.

I will continue writing about the highly sophisticated LED lighting system being designed for the ISS and how this astronaut-friendly lighting, based on the much smaller size of the Orion spacecraft, will be further tuned for deep-space travel to asteroids and beyond.

And I will tell of connections between students and space — including my own. At 9:56 p.m. CDT on July 20, 1969, I and more than half a billion people glued to their television screens watched Apollo 11 astronaut Neil Armstrong slowly descend a lunar module ladder to set foot on the moon.

I was 6 years old. More than four decades later, that black-and-white scene from my family’s rabbit-eared TV remains seared in my mind.

Astronauts were my heroes. They still are. So my next #spacED blog post will feature Arnold, the astronaut who provided delightful lunch company for the #spacED group in a Johnson Space Center cafeteria. Arnold, a former public school teacher whose international classroom stints included Indonesia, Morocco, Romania, and Saudi Arabia, was selected by NASA as a Mission Specialist in 2004. He completed Astronaut Candidate Training in 2006 and in March 2009 flew on the Discovery Space Shuttle to the International Space Station where he conducted two spacewalks in the course of installing power-generating solar array wings and a truss segment. 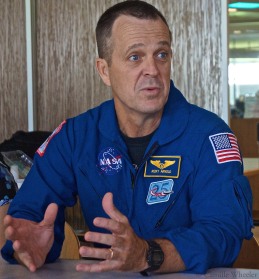 Arnold immediately put the #spacED group at ease, sharing his background and his love of education. He repeatedly made eye contact with each member of the group around the table, engaging us and fostering a fun, relaxed atmosphere. Spending an hour with an astronaut is the closest I’ll ever come to space travel, and I and my group team members heartily laughed when Arnold passionately described his experience.

“Going to space is fantastic,” said Arnold, who is waiting his turn to serve another space station mission. “I highly recommend it.” 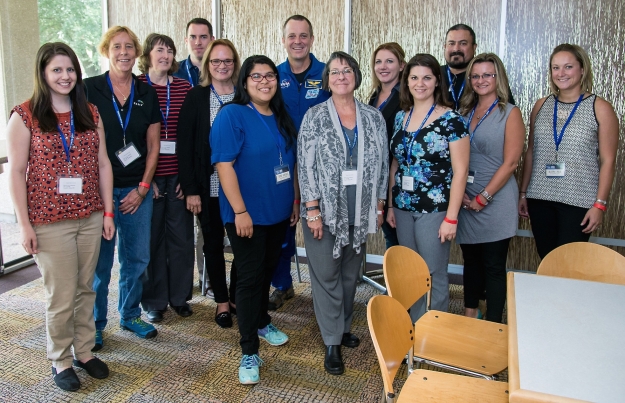