Even as he wrestled with his own darkness, Vincent van Gogh craved the colors of light. His most famous painting, The Starry Night, explodes with yellow, orange, and blue stars swirling into a golden glob of a crescent moon. Within that frame, this masterpiece hangs as the iconic poster for dark night-sky preservation efforts around the globe.

But easily missed in the painting is the anchoring scene beneath the wild night sky. Soft yellow light spills from village windows, reaching for and consumed by the heavens blazing above. It is a relationship Van Gogh depicted time and again: human light co-existing with natural light, but far from its equal.

It is a theme threaded into the multilayered light of Van Gogh’s works. In the 2008 book “Van Gogh and the Colors of the Night,” published in conjunction with the exhibition of the same name at The Museum of Modern Art in New York City and the Van Gogh Museum in Amsterdam, art historian Joachim Pissarro describes the representation of “crepuscular and nocturnal reality” found throughout Van Gogh’s works.

Pissarro, great-grandson of Impressionist painter Camille Pissarro, a Van Gogh contemporary, explains that Van Gogh’s relationship with twilight and night dated back to 1878, when he first sketched a night café scene.

Pissarro, as adjunct curator in MoMA’s Department of Painting and Sculpture, wrote that “Van Gogh was fascinated by this dual and paradoxical moment: the fading of daylight, culminating in an intense though short-lived sunset, followed by the fall of darkness and then by the emergence of focal points of artificial light and the scintillation of stars and moon against the night sky.”

This same duality is observed in other Van Gogh works, such as The Cottage, in which a single, tiny flame is seen through the window, and Terrace of a Café at Night (both seen below).

The Cottage © The Van Gogh Museum, Amsterdam (Vincent van Gogh Foundation)
Nuenen, May 1885. Oil on canvas, 65.7 cm x 79.3 cm.
A recurrent theme throughout Van Gogh’s work is that of cottages as “human nests.” Hence, the Van Gogh Museum’s online description of this twilight painting: “The cottage looks like a nest, built using whatever came to hand. … Light glows through the glass, creating a sense of warmth and safety.”

Terrace of a Café at Night (Place du Forum) © Stichting Kröller-Müller Museum, Otterlo, The Netherlands
Arles, France, circa September 16, 1888. Oil on canvas, 80.7 x 65.3 cm.
“On the terrace, there are little figures of people drinking. A huge yellow lantern lights the terrace, the façade, the pavement, and even projects light over the cobblestones of the street, which takes on a violet-pink tinge. The gables of the houses on a street that leads away under the blue sky studded with stars are dark blue or violet, with a green tree. Now there’s a painting of night without black. With nothing but beautiful blue, violet and green, and in these surroundings the lighted square is coloured pale sulphur, lemon green.”
—Excerpt from a September 1888 Van Gogh letter to his sister Willemien

In September 1888, shortly after completing Terrace of a Café at Night in Arles, France, Van Gogh amplified his vision of the night, carrying his equipment to a seawall overlooking the Rhône River in Arles. The 2011 biography “Van Gogh: The Life” details the genesis of this masterpiece, Starry Night over the Rhône (below), and how Van Gogh provided work light by setting up his easel under one of the gas lamps lining the seawall. 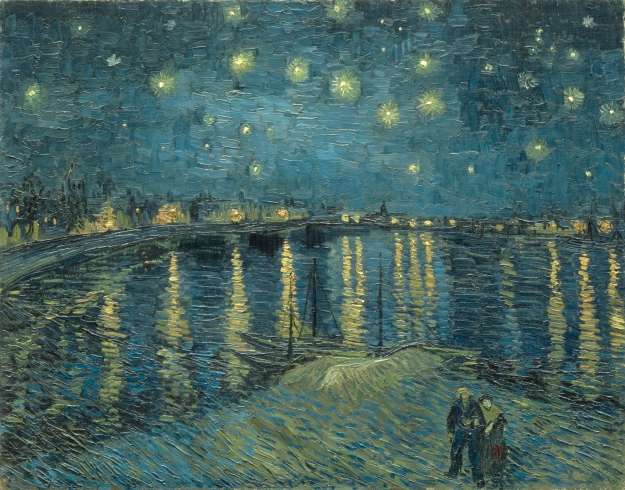 © RMN-Grand Palais / Art Resource, NY 1. S0163724 ART147119
Gogh, Vincent van (1853-1890). Starry night over the Rhone River, 1888. Arles.
Oil on canvas, 72.5 x 92 cm. RF1975-19. Photo: Hervé Lewandowski.
Musée d’Orsay, Paris
Shortly after completing Terrace of a Café at Night, which portrayed a corner of a night sky, Van Gogh realized his obsession of painting a color-driven, starry night, using gaslight to help him paint on location outdoors in the dark. “Next came this view of the Rhône in which he marvellously transcribed the colours he perceived in the dark,” Musée d’Orsay curators write in their online description of Starry Night over the Rhône: “Blues prevail: Prussian blue, ultramarine and cobalt. The city gas lights glimmer an intense orange and are reflected in the water. The stars sparkle like gemstones.”

As “Van Gogh: The Life” authors Steven Naifeh and the late Gregory White Smith wrote, Van Gogh focused on the ultimate subject, the night sky, while also paying heed to the play of light on the city and river. The “ruthless reflections” of gas lanterns on the Rhône, as Van Gogh termed the effect, were captured in hundreds of short strokes.

In “Van Gogh and the Colors of the Night,” art historians Maite van Dijk and Jennifer Field describe how this painting “combined the complex light effects and reflections of gas- and starlight into a compelling representation of the infinite night sky.”

The erudite Van Gogh was light years ahead of his time, blending his love of art, literature, religion, astronomy, nature, and topography to map out a new vision of the cosmos, the human existence below, and a keener understanding of how light and color play out during the Earth’s 24-hour day-night cycle.

But 125 years after Van Gogh’s death, our relationship with light has precariously reversed. Never have we seemed so hell-bent on separating ourselves from the heavens by draining the world of darkness. Never has the Earth glowed with so much electric light. Never has exposure to light at night posed such a threat to our health, with the disruption of our biological clocks and melatonin production increasing the risks of cancer and other diseases and disorders.

And never, comes the twist, has light offered such incredible potential to heal, to energize, to inspire, to protect, to guide, to stimulate, and to soothe.

In the spirit of Van Gogh, whose canvases wore the colliding colors of day, dusk, and night, I relay the warning from scientific researchers and dark night-sky advocates: Excessive and overly bright electric light at night is threatening our health, disrupting ecosystems, and separating us from our cosmic cultural heritage.

Generations of children are growing up having never seen the Milky Way. But at its most effective, the discussion joins dark and light: not as mortal enemies, but as symbiotic twins. For the conversation to be life changing for the masses, many of whom have never witnessed a star-studded sky, it maintains a focus on heaven and Earth, where an extraordinary story is taking shape:

From the testing of astronaut-friendly LEDs for the International Space Station to the fast-growing field of daylighting design, a global group of diverse experts is teaming for a multidisciplinary exploration of light that offers solutions for the challenges to our physical, mental, social, and creative wellbeing.

It’s easy to envision Van Gogh as a part of this exploration. As Joachim Pissarro once told me in a phone interview, Van Gogh likely would not be a painter if he were alive today. Rather, says Pissarro, Bershad Professor of Art History and director of the Hunter College Art Galleries in New York City, Van Gogh would be ahead of the game. His insatiable drive and vision most likely would propel him into new ventures, perhaps as a video or digital artist in emerging technological fields.

And undoubtedly, the space-station/rocket-science component of light research for astronauts would please Van Gogh, a connoisseur of literature who counted a 19th-century contemporary, science-fiction writer Jules Verne, among his favorites.