I’m Camille Wheeler, a veteran newspaper and magazine reporter and editor, a nature lover, a wanderer of mountain and desert roads, and a chaser of light. Since 2012, my writing research has been focused on the most exciting new frontier in light research: the exploration of the eye’s amazingly old and amazingly powerful nonvisual light-sensing system. I am a journalist and a layperson. My journey, like that of the scientists whose work I am following, is a never-ending process of discovery. And the findings don’t get any bigger than that of a new photoreceptor system in not just the human eye, but in the eyes of all mammals. This ancient system, officially discovered in 2002, performs a most important job: It detects the wavelengths of light that drive our biology and behavior through the resetting of the master 24-hour — the circadian — clock in the brain. The workings of this nonvisual system are shaping health and light research around the world, from long-duration space travel, to medical technology in hospital and healthcare settings, to lighting in professional sports stadiums, to comfort in our homes. I am particularly fascinated with the work of a flexible lighting design team, composed of neuroscientists and light and sleep researchers, which in collaboration with NASA is developing and testing an astronaut-friendly LED lighting system for the International Space Station. This highly sophisticated LED technology is designed to improve astronauts’ sleep, vision, safety and work performances. A talk I gave in August 2014 at the Better Lights for Better Nights Conference in Dripping Springs, Texas, focused on this groundbreaking research that holds huge implications for lighting applications on Earth. In the world of natural light, I am especially enamored with the light-seeking African dung beetle. A Swedish research team has discovered that on clear nights when there’s little to no moonlight, this dung beetle avails itself of another GPS device: the glowing disk of the Milky Way, composed of millions and millions of stars. This research, published in 2013, provides the first documented use of the Milky Way for orientation in the animal kingdom. But this isn’t solely a scientific and technological site. My blog title, “The Light of the Road,” also covers artistic and spiritual ground. I am mesmerized with the art of light as seen in the extraordinary work of contemporary light installation artist James Turrell and the pursuit of light and darkness via the genius of Vincent van Gogh. I am enthralled with the art of light in connection with the art of relationships: our relationships with each other, with the natural world and the animal kingdom, and how all forms of co-existence can be elevated through the application of light-filled love and compassion. I am enchanted with the nocturnal Eastern screech-owls that in the spring and summer live in a tree cavity in my urban backyard. As daylight fades, they perch on the cavity’s edge, waiting for the soft-light summons of dusk. (See my related Texas Parks and Wildlife magazine story at www.tpwmagazine.com/archive/2015/may/LLL_owls.) A little bit more about me: I am an Austinite and native Texan who could live on hot sauce, jalapeños and brisket. My favorite spot on Earth is Big Bend National Park, where I hope to someday photograph a mountain lion in the wild. In my living room hang two framed photographs, both taken in far West Texas by one of my favorite photographers, Woody Welch (http://woodywelchphotography.com). One photo is of the Milky Way stretching up into the night, arching its back over McDonald Observatory high in the Davis Mountains. This photo accompanied my December 2010 Texas Co-op Power magazine cover story (www.texascooppower.com/texas-stories/nature-outdoors/starstruck) that explored the quest to protect West Texas’ dark night skies — some of the darkest in the world — from rapidly increasing light pollution. The other photo is of a fleeting moment of light in Marathon, 70 miles north of Big Bend. It is twilight, immediately following a summer monsoon, and rain glistens on a train, its headlight on as it rolls through the tiny town. In the distance, the red, yellow and purple hues of sunset illuminate the contours of the Del Norte Mountains, the final rays of the day seemingly laid down in patterns of silk. Somewhere between these two scenes lies my relationship with light. It is to such a spiritual place that I hope to take readers — a destination of mystical, transformative light. 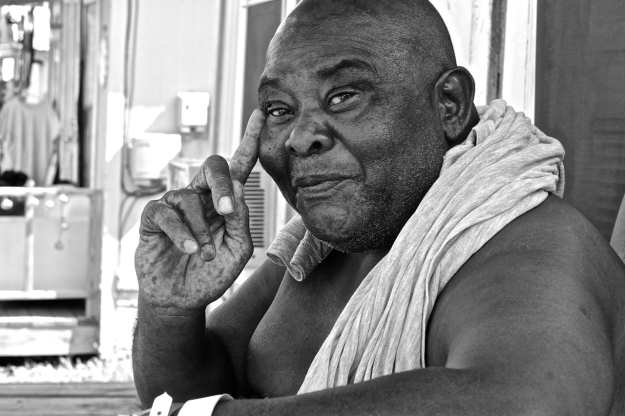 R.L. lives in East Austin, just off 12th Street on a dead-end, one-lane street lined with tiny houses, most of them one-bedroom.

The intersections of Sixth Street in downtown Austin change from day to day, hour to hour. Different characters, different conversations, different cultures. Somebody’s always talking about something, knowing that somebody will stop and listen.

Michael Urie, who played the character Marc St. James, was on hand for a cast reunion of the ABC comedy-drama Ugly Betty on Saturday, June 11, in Austin, Texas. The reunion, sponsored by Entertainment Weekly, was held at the Paramount Theater as part of the ATX Television Festival.