Photo credit: NASA
In March 2009, Astronaut Ricky Arnold spent nearly 13 days aboard the International Space Station, conducting two spacewalks to help install power-generating solar array wings and a truss segment. Arnold, selected as one of three Mission Specialist-Educators in NASA’s 2004 astronaut candidate class, mirrors the path NASA continues to follow as it seeks a new class of astronauts to explore deeper in space than any human has gone before. The deadline to apply as a NASA astronaut candidate is Thursday, Feb. 18.

Piece by piece, NASA’s Orion deep-space exploration vehicle is being readied for historic journeys to far beyond the moon, asteroids, and the ultimate destination: Mars. With its pressure vessel and primary structure now complete, Orion sits at Kennedy Space Center in Florida where engineers are integrating the spacecraft’s systems with those of its future ride — the Space Launch System, under design as the most powerful rocket ever built.

This is heady stuff. But if you think that NASA’s mission of sending humans to Mars applies only to a narrow segment of the U.S. population, think again: Through this Thursday, Feb. 18, NASA is accepting applications from qualified U.S. citizens (apply at www.usajobs.gov/GetJob/ViewDetails/423817000) for what officials call a new class of astronauts to fly on a record number of U.S. human-crewed spacecraft in development.

As NASA details, the astronaut candidates expected to be announced in spring 2017 might fly on any of these spacecraft during their careers: the International Space Station, two commercial crew spacecraft in development by U.S. companies, and Orion.

Photo credit: NASA/Radislav Sinyak
Orion, NASA’s deep-space exploration vehicle, is being prepared at NASA’s Kennedy Space Center for a 2018 test flight called Exploration Mission-1. Orion, with no humans aboard, will be thrust into space atop the Space Launch System rocket and then venture some 40,000 miles beyond the moon over the course of a three-week mission.

To be clear, selected astronaut candidates will represent an elite group. Required applicant qualifications include a degree in aviation or similar fields with at least three years of professional experience obtained after degree completion or at least 1,000 hours pilot-in-command time in jet aircraft; the ability to pass NASA’s long-duration astronaut physical; and possession of certain body types, defined via anthropometric specifications, that are best suited for spacecraft, spacesuits, and spacewalks.

But the next class of astronaut candidates will also mirror a wide variety of backgrounds. As NASA officials observe, the professional networking site LinkedIn reports that approximately 3 million of its members working in the U.S. appear to meet the minimum academic eligibility requirements for astronaut careers.

Moreover, astronaut candidates will be selected from a diverse pool of U.S citizens, including engineers, scientists, and physicians. With an eye toward education and research, NASA’s broad academic stipulations require candidates to have bachelor’s degrees in engineering, biological science, physical science, computer science, or mathematics.

That opens the door wide for many individuals, notes Brian Kelly, director of Flight Operations at NASA’s Johnson Space Center in Houston where the next class of astronaut candidates will live and train starting in fall 2017. “Some people would be surprised to learn they might have what it takes,” Kelly was quoted as saying in a Dec. 14, 2015, NASA press release. “We want and need a diverse mix of individuals to ensure we have the best astronaut corps possible.”

“My path here is not standard,” Astronaut Ricky Arnold says of a diverse career that brought him to NASA’s Johnson Space Center in Houston.

Yet NASA’s quest to diversify its astronaut ranks with an array of educators is not new. In September 2015, as a selected participant in Johnson Space Center’s first-ever #spacED education media workshop, I got the opportunity to meet Astronaut Ricky Arnold, a former schoolteacher who is as down to earth as they come.

On Sept. 15, Arnold generously spent his lunch hour with the #spacED group in a Johnson Space Center cafeteria, describing his almost 13-day-stay aboard the International Space Station in 2009. “Going to space is fantastic,” said Arnold, who is waiting his turn to return to space. “I highly recommend it.”

In October, I conducted a follow-up phone interview with Arnold, who serves as Chief of Extravehicular Activity (EVA) and Robotics within the Astronaut Office at Johnson Space Center. Arnold’s myriad responsibilities include providing oversight and guidance of space-station spacewalks.

I told Arnold of my fascination with the progression of his career path: how after he earned an undergraduate accounting degree, Arnold then heeded the call of science and education, becoming a U.S. Naval Academy oceanographic technician, marine biologist, schoolteacher, and pilot en route to the highest title of all: an astronaut working and living in space.

Indeed, Arnold said, what he most wanted to discuss was the unorthodox road that brought him to Johnson Space Center in 2004, courtesy of academic and career choices that yielded a master’s degree in marine, estuarine and environmental science; research time aboard a sail training/oceanographic vessel; and opportunities to teach middle school and high school science and math overseas with stops in Morocco (where he taught college preparatory biology and marine environmental science), Saudi Arabia, Indonesia, and Romania over the course of a decade starting in 1993.

Arnold’s path proved to be particularly attractive to NASA, which in January 2003 issued a call for educators to help lead the agency in connecting space exploration to the classroom. NASA sought educators who specifically:

Arnold learned that NASA was encouraging elementary, middle school, and high school teachers to apply. Unsure of his chances of being accepted, Arnold applied anyway — and in summer 2004 reported to Johnson Space Center as one of three Mission Specialist-Educators in the astronaut candidate class that included military and civilian pilots, physicians, engineers, scientists, and a Navy Seal.

Arnold learned of his acceptance via the biggest phone call of his life. While vacationing in the Florida Keys to spend time fishing with his father, Arnold received a call from his wife in Romania, where Arnold was teaching at the American International School of Bucharest. Kent Rominger, Chief of the Astronaut Office at NASA, called, Arnold’s wife said. He wants to talk to you.

But Arnold and his father had just started crossing the Florida Keys’ famous Seven Mile Bridge. Arnold lost cell phone reception while driving across the bridge and was unable to immediately return Rominger’s call during what he describes as the longest seven miles of his life. Finally, Arnold regained reception and called Rominger back.

“What do you want me to do?” Arnold asked. Rominger’s reply: “I want you to be an astronaut.”

And so began the next phase of Arnold’s life. The schoolteacher with no military or flight experience became a pilot, learning to first fly a T-34 trainer plane and then the space shuttle. Arnold completed astronaut candidate training in 2006 and in March 2009 flew on the Discovery Space Shuttle to the International Space Station where he conducted two spacewalks in the course of installing power-generating solar array wings and a truss segment.

The moral of his success story, says the 52-year-old Arnold, is to follow one’s passion: to never close doors on opportunities, no matter the degree of difficulty.

For example, Arnold notes the importance of his decision to pursue a master’s degree in science at the University of Maryland’s Center for Environmental Science in the Horn Point Laboratory. His research in biostratigraphy led to his paleo-ecological reconstruction of long-term changes of aquatic grasses in the Severn River. In turn, that study produced a research article published in the Journal of Coastal Research.

And in turn, like a bridge across water, that research led to work as an assistant scientist with the Sea Education Association, headquartered in Woods Hole, Massachusetts. The depth of Arnold’s educational background, including his adventures at sea aboard a sail training/oceanographic vessel, intrigued NASA officials.

“My path here is not standard,” says the 52-year-old Arnold, who can say the same of his nothing-but-routine schedule at Johnson Space Center. With an eye toward his own possible return to the International Space Station, and his critical work with the astronauts living there now, Arnold’s training regimen includes Russian language classroom work, underwater spacesuit maneuvers in the Neutral Buoyancy Laboratory, and cockpit time in a T-38 jet. 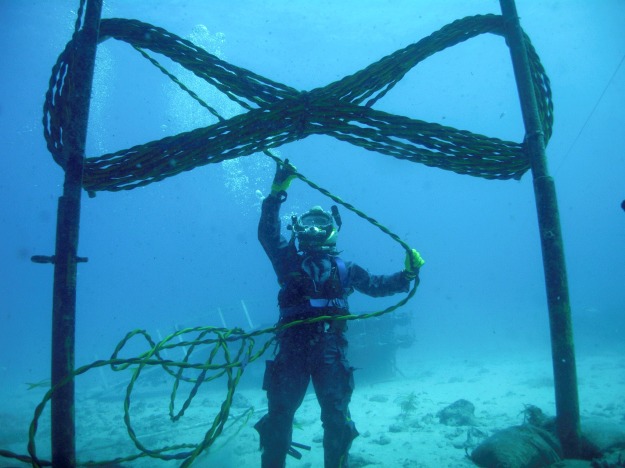 Photo credit: NASA
In 2007, two years before he flew to the International Space Station, astronaut Ricky Arnold spent 10 days on an undersea mission with NEEMO: the NASA Extreme Environment Mission Operations project located in the Florida Keys National Marine Sanctuary in which astronauts, engineers, and scientists live in Aquarius, the world’s only undersea research station. During undersea “moon walks,” Arnold and his NEEMO 13 crew members performed a series of tasks and experiments, including the investigation of future spacesuit design research related to the physiology and human behavior aspects of living in extreme environments.

Arnold’s advice to potential astronauts comes from a wealth of diverse experiences. “As you move along in your career and life, you don’t notice crossroads when you come to them,” he says. “Keep doors open as long as you can and pay attention to the forks in the road that can challenge you and help you grow as a person.”

Also worth considering: Be willing to relocate, just as Arnold was more than a decade ago when he and his family left Romania for Houston, Texas. And remember, as NASA’s astronaut candidate job application specifies for journeys leading to the ultimate trip to Mars: “Frequent travel may be required.”