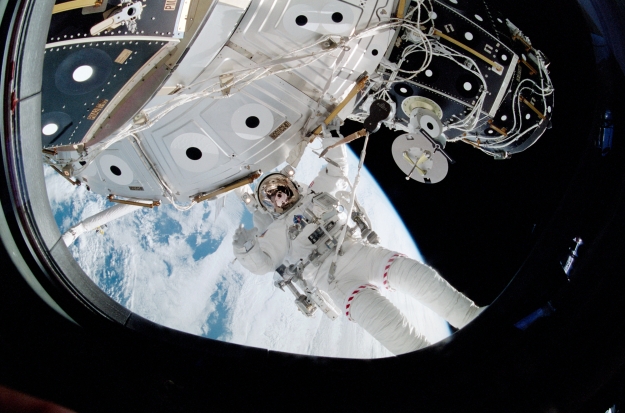 NASA Identifier: sts092-367-035
In the 21st century, for the first time, scientists are studying the workings of the eye’s ancient photoreceptor system, which evolved before vision. The origins of the nonvisual system possibly date back at least 500 million years. New research about the eye’s light-sensing system is driving high-precision LED light technology being designed to improve the health and safety of astronauts aboard the International Space Station.

Unlike the eye’s visual rods-and-cones system, which produces images, the nonvisual system provides a measure of environmental presence and intensity of light. It is composed of photosensitive retinal ganglion cells, which get their light-measurement abilities from a light-sensitive photopigment called melanopsin.

Melanopsin, not to be confused with melatonin or melanin (a pigment that gives color to skin and eyes), shows a peak sensitivity to short-wavelength blue light: the light that most readily activates the brain, suppressing melatonin — the chemical expression of darkness, as termed by pioneer melatonin researcher Russel J. Reiter — and preparing the body’s physiological and psychological systems for daytime activities.

In the 21st century, for the first time, scientists are studying the workings of this ancient photoreceptor system, which evolved before vision. Researchers believe the origins of the nonvisual system possibly date back at least 500 million years, to the branch of animal evolution featuring sea stars and sea urchins. But this photoreceptor system — discovered just over a decade ago, in 2002 — is so small that generations of scientists overlooked it during centuries of research on the eye’s visual processes.

“The discovery of a new sensory apparatus in the human eye after hundreds of years of careful research on the visual system serves as a reminder of how easy it is to miss critically important physiology,” neuroscientist George C. Brainard wrote in the 2005 research article “Photons, Clocks, and Consciousness” (Brainard, John P. Hanifin, Journal of Biological Rhythms).

Brainard, director of the Light Research Program at Thomas Jefferson University whose decades of research helped lead to the discovery of the eye’s nonvisual system, explained in the article that the science of human circadian phototransduction — the process in which light, via detection by the eye’s light-sensing system, is transformed into electrical signals for the brain — was still in its infancy. “Expanding the frontiers of this field will teach us how to better use light for the benefit of humanity,” Brainard wrote.

Brainard is playing a huge role in expanding those frontiers: The neuroscientist continues to work with NASA in developing light for long-duration space travel, including the International Space Station.